I was thinking about my last post, and my love of storytelling. Our oldest daughter has inherited this, and typically when I answer a phone call from her I hear, “Mom, I have stories.” She then proceeds to give me the blow-by-blow of her encounters and adventures of the day.

I think I inherited my own interest in storytelling from my Grandma Carter, the one whose old typewriter enabled me to publish that single issue newspaper. She was the torchbearer of family history, amassing all of the family photos, genealogical records and personal narratives. When I was in high school, she and I went through a huge box of old photographs. Most of them weren’t written on, and I remarked that she should identify the people in the pictures for me. We decided to number each picture, and then as she had time she went through them and wrote on sheets of paper the photo number and the people in the photo. To my great delight, she went a step further and wrote stories about the people in the photos and anecdotes that the photos reminded her of. 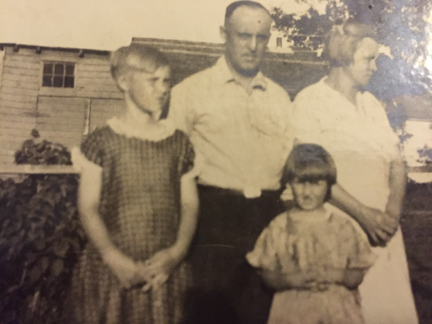 Grandma on the left, with her “boy bob” hairstyle

“When I was about 12 it was a fad to have what they called ‘boy bobs’. My uncle Mike Metz was a barber in Stacyville so I went to him and said I wanted my hair cut that way. He asked if my parents knew and I said, ‘They won’t care.’ Well, my mother was very upset and threatened to leave me home all summer when they went places. It wasn’t very becoming to me.”

“We had a potluck at school. I didn’t like what my mother was taking. We had a lady who didn’t have a reputation as being very clean. Mother said to me, ‘I hope you get some of Mrs. Young’s.’ So when we were eating I told this to the people sitting around us. I was in the doghouse for that.”

Many of her stories end with a wry one-liner. 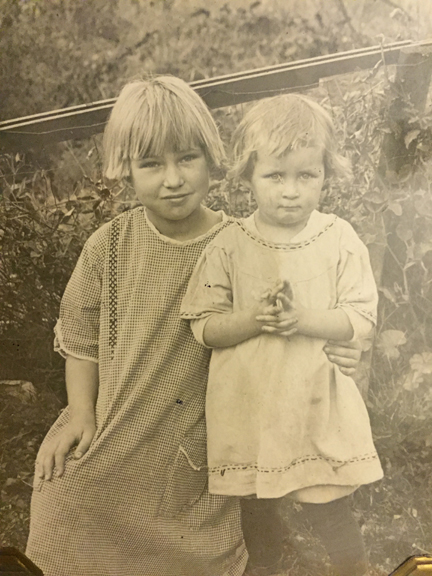 Grandma (left) and her sister Viola

“Viola and I walked to school together and she was never ready to go when I was. She would cry for me to wait as I went ahead of her up the road. I think I can say I was never late for school.”

“My mother’s Aunt Mina was quite tall, stood very straight and always looked very regal. I wanted to be straight and tall like her. I didn’t reach my goal.”

And there are some tragic stories, also told in her matter-of-fact style. 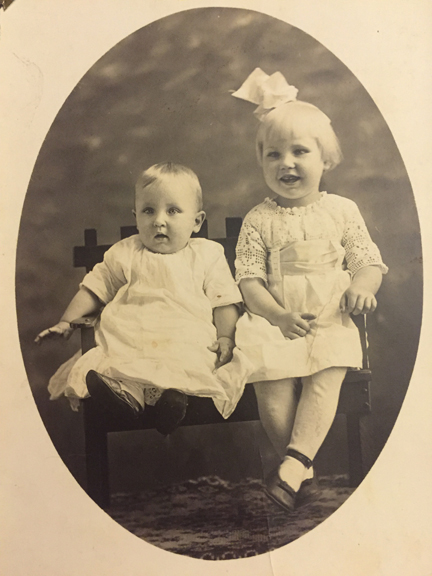 Grandma (right) and her sister Ada

“Of course the death that affected me most was my sister, Ada. She was a couple months past 5 and I was 7-1/2. She died in winter of 1923. She some way got spinal meningitis, the only one in town who had it. People were very afraid of it and we were quarantined. She was in the bedroom on one side of the house. Grandma Metz had Viola (she was 18 months old) and me in the kitchen part. The two Dr.’s in town (Stacyvillle) came and took care of her. She died in two weeks. It was quite a while I couldn’t go to school. The only dream I remember is one I had for a while after my sister died. I would dream a big ball I thought was as big as the world was rolling after me and I was running from it. It would break open and bears would come out and chase me. I would wake crying. They had me sleep with Grandma Metz as I had always slept with sister Ada.”

I gathered up the pictures, genealogical records, and her stories and put everything into scrapbooks. Between her Ruesink/Metz side of the family, and my grandpa’s Bishop/Carter side of the family, I’ve got 5 large scrapbooks covering all of the old family pictures she had, going through her high school graduation. And I’ve made one of them into a printed photo album. I wanted my brother and his family to have their own copy of the stories and photos, plus it serves as a digitized backup in case anything ever happens to the original scrapbook.

Other family storytelling projects I want to tackle:

1. Work with my mom to pick up where Grandma left off, documenting the photos and stories from after my grandparents were married.
2. Get my mom to do the same with the photos from my childhood.
3. Digitizing the rest of the family history scrapbooks I have, so that they can easily be shared with others and so that there are backups of them in case something happens to the physical albums.
4. Getting my own family photos off my computer and into albums, along with all the little stories and quotes from the kids that I have recorded in various places.
5. Scrapbooking Matt’s childhood photos.
6. Documenting family “treasures” – some are in my possession, some are in my mom’s possession or in her safe deposit box. A picture of each item and a description/history.
7. Mini albums for trips and special events.

I’ll be sharing some of my projects here as I work on them. My first order of business is to finish several “works in progress”, some of which I started years ago.

Tell me, do you scrapbook? Do you print your photos or do they all live on your computer? Do you have old family photos?

Installment #9 : One of these things just doesn’t belong here

This entry was posted in Scrapbook storytelling. Bookmark the permalink.