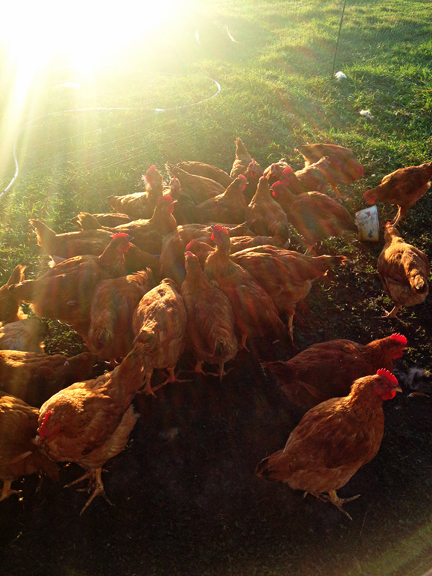 Did you know chickens have schedules? And secretaries (aka “me”) that manage said schedules? Ours do, and they are tyrants to work for, I tell you.

Last year we raised a batch of Red Rangers at the end of the summer just to give them a try. We weren’t sure what our customers would think, but we’d heard good things about the breed so we took a leap of faith that we’d be happy and so would our customers.

We absolutely loved raising them. They had fewer health problems overall than the CornishX we’ve raised forever. They act more natural – more “chicken-y”, if you will – than the CornishX, which means they’re a bit flightier in the brooder stage. But once on pasture they could actually be taught to put themselves in the shed at night!

We were equally as pleased with the taste and, from the feedback we’ve had so far, so were our customers. When compared with the CornishX, I’d describe the CornishX as a very neutral meat whereas the RR’s have more of an actual taste and flavor to them. The breasts are somewhat smaller on the RR’s, and the drumsticks somewhat bigger. 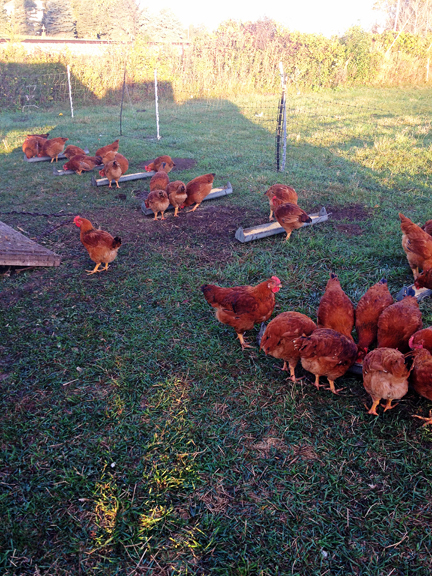 So we decided that for 2014, we’re raising all Red Rangers. The one downside is that they take about 3 weeks longer to finish than the CornishX. Which means that my usual schedule for raising 600 birds a year had to be revised. Previously we would raise 4 batches of 150 – 2 back-to-back in the spring, a break during the hottest part of the summer, then 2 back-to-back in the late summer into fall.

We’ve always scheduled the first batch of the year so that they’ll be 3-1/2 weeks old when we move them onto pasture the first weekend in May. Yes, there have been years when there were snowflakes in the air while we were moving them out, but it’s generally short-lived and when they’re that small we can shut them inside of the shed for a few days if needed and they do fine.

With the RR’s taking 10 weeks to finish, we’ll still base the first batch on moving out the first weekend in May but we won’t be able to take a break mid-summer. Which is okay, because another advantage of the RR’s is that they can take the heat! And we’re going to try 175 per batch instead of 150. That will leave us short of our usual 600, but we don’t want to overcrowd them. We’ll see how it goes this year and whether we need to make some adjustments to our setup with the brooder and/or in the pasture. 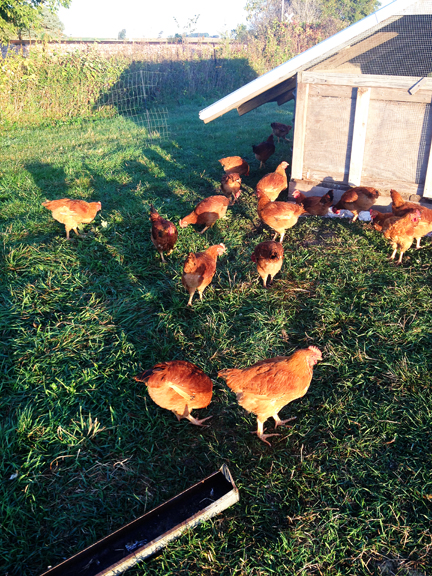 So our first batch will be arriving a week from Thursday! Anyone wanting a bit of baby chick therapy is welcome to stop and hang out in the brooder (aka “my attached garage that I can only park in about half the year and I feel like a total hillbilly raising livestock in it.”). They’re so much fun to watch, and there’s just something soothing about all that peeping.

You can reserve your freezer chickens for June now! Cut ups are $2.85/# and uncut is $2.75/#. Just let us know how many, and whether you want them cut up or uncut (or some of both), and the best way to contact you when they’re ready.

Yeah for the first batch of chicks of the year, because it means spring is finally here!

This entry was posted in Farm Plans and tagged chickens. Bookmark the permalink.