The year the music died

The Grim Reaper has been on a tear with musicians in 2016. And it’s only April. At this point people have had enough already and I’m seeing tweets like, “That the universe would form a protective layer around Paul McCartney, we pray.” (@unvirtuousabbey)

But none hit me as hard as the news that Prince had died. I’ve had the all-Prince iHeartRadio station on non-stop ever since, taped the airing of Purple Rain on VH1, read every Rolling Stone article, watched every video I’ve seen shared on Facebook. The depth of grief I felt took me by surprise, and I’ve been thinking about why the past 4 days.

My grandparents gave my parents a stereo the first Christmas after they were married. In 1969, a stereo was a rather large piece of furniture. It took up a lot of real estate in the living room of the tiny farmhouse they rented near New Haven. When I came along almost a year later, they wedged my crib alongside it, end-to-end, because the upstairs bedrooms were too cold for a winter baby. My mom says when I was fussy they’d put me in my crib, put a Johnny Cash or Elvis record on the stereo, and I’d settle down and go to sleep.

“Or maybe we just couldn’t hear you crying over the music. Either way,” she said with a shrug of her shoulders.

When I was 15 months old they moved to the farm on River Road where I grew up. There I got an upstairs bedroom, and the stereo lived in the dining room, smack dab in the middle of the house. The soundtrack to my childhood was The Rolling Stones, The Eagles, Captain & Tennille. Later it was Willie, Waylon, and Kenny Rogers. Those three still take me back to the farm crisis of the 80’s, and I can feel again the cloud of worry that hung over my parents and the uncertain future of our own farm. 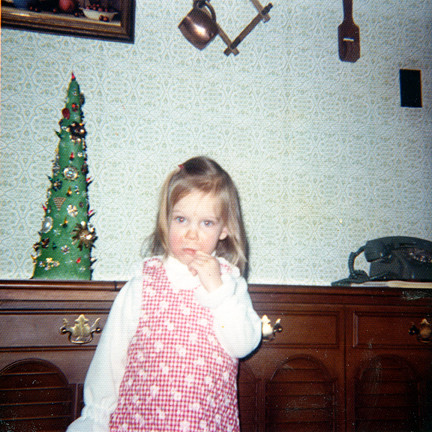 Me in front of the stereo, Christmas 1972

There was always music on, whether it was on that stereo, or the 8-track cassette player in their avocado green Pontiac, or on Saturday morning “American Bandstand” when my mom would have a dance party with me in the living room in front of the tv. I give my parents credit for always being pretty tolerant about what music I listened to. The only albums my mom ever banned from the house were the Violent Femmes and 2 Live Crew (which was actually my friend Susan’s album I had borrowed.) Even then, she just asked that I only play them in my car.

(Although when I brought this up to her she said, “Oh, was the Purple Rain album bad? I guess I never noticed.” Better listen to the song “Darling Nikki” again, Mom.)

When I was 13, the first album I ever bought for myself with my hard-earned babysitting money was Purple Rain on vinyl. I had a little record player of my own in my bedroom. But I preferred to play it on the big stereo in the dining room, lying on the blue-and-brown shag carpet, my ear right up to the speaker so that I could catch every lyric, every instrument, every riff. I had never heard anything like it. The funk style, the raw lyrics that flowed like poetry, the openly sexual themes. My dramatic 13-year-old-self related (or wanted to) so deeply to his frustrations with his parents, with love, and the simultaneous beauty and desperation that is life.

That, I realize, is the reason his death has hit me so hard. His was the first music that was my music and not my parents’ music. And it feels like the end of an era, as I imagine Elvis’s death felt to my parents. Prince was so insanely talented, and creative, and original. Does it make me old and crotchety that, in this moment, I can’t identify that same level of creativity in any of today’s music? Probably.

So I pulled out that Purple Rain vinyl I bought in 1984, and played it on the little record player I have now. I sang along, every lyric still rolling off my tongue as easily as they did at 13. And I said a prayer of protection for Sir Paul McCartney.