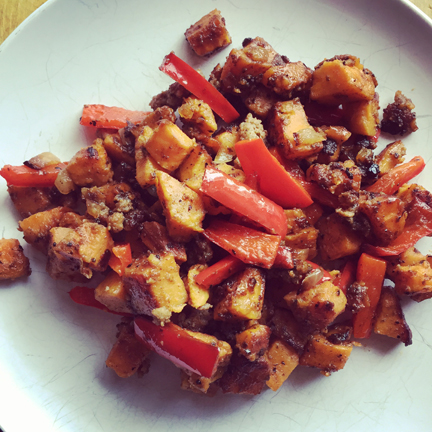 I don’t remember how I even heard of the Whole 30 program, but I’d been thinking about trying it for a while now. I felt like my brain just wasn’t as sharp as it used to be, and my energy levels were terrible. I kept thinking, “I’m too young to feel this old!” And I was pretty sure the culprit was my diet. I felt absolutely addicted to sugar and was deep in that cycle of eating carbs and sugar, only to crash a couple of hours later. The Whole 30 plan sounded like just what I needed to detox myself and establish some better eating habits in the process. 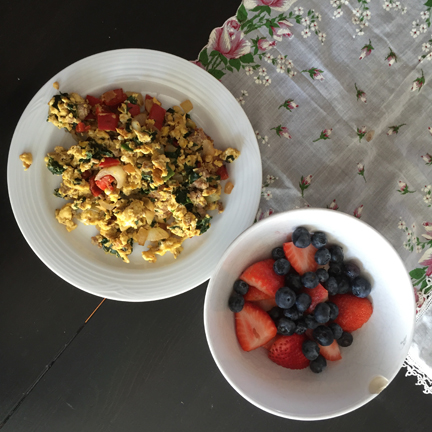 In a nutshell, you eliminate dairy, grains (including the gluten-free ones), alcohol, sweeteners (including the natural ones like maple syrup and honey), and beans, peas and legumes. And there are other rules about not eating foods that may technically be in compliance because they’re made with approved ingredients, but they’re not allowed because they are the types of things we typically eat mindlessly. Like dessert, and anything deep fried.

In other words, you give up everything good and cry for 30 days. Matt said, “I give you a Whole 3 days.” Such a supportive husband. (He obviously knows me well.) 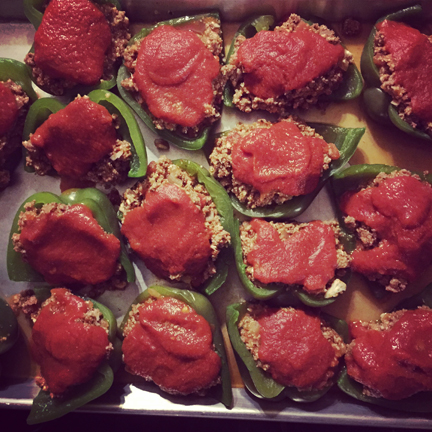 Of course taking on something like this is easier when you have a partner. So I enlisted Olivia, because she has a keen interest in health, nutrition, and all-around wellness. She’s thinking of majoring in nutritional science next fall. She’s always chastising me for buying potato chips and granola bars. I knew she’d be game for it.

We decided we wanted to get through Valentine’s Day and the state wrestling tournament before we started, so we settled on March 1st as a start date. I did some planning, gathered recipes, did some shopping – and we began.

My breakfasts definitely got more colorful this month

Day 1 was easy. The enthusiasm was high, and I felt great about the healthier choices I was making. It was a piece of cake!

A piece of cake I couldn’t eat. 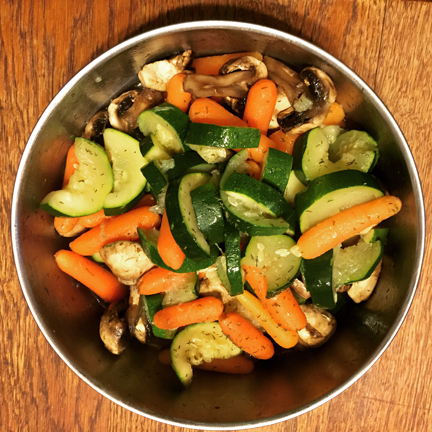 Steamed mushrooms, zucchini, and carrots with ghee and dill

Days 2 through 10 were harder. These were the days my body was detoxing all the crap I’ve put into it recently. I was hungry a lot. I craved sugar a lot. The brain fog did start to lift, which was nice, but I kept asking Matt, “where is all this energy I’m supposed to be feeling?!” Some days were akin to having PMS. I just wanted to bite the head off anyone around me. Especially if they were a chocolate rabbit. 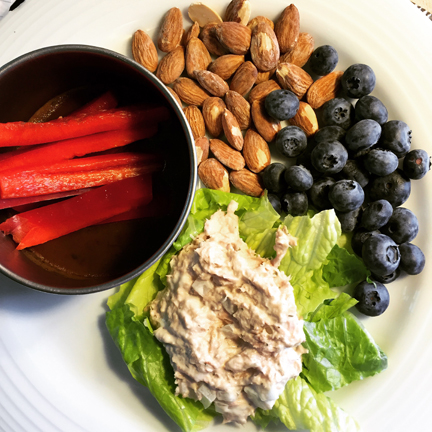 About day 10 I finally started feeling that promised surge of energy. I’d read that it’s more typically day 16 before that happens, so I felt lucky there. I didn’t fight to stay awake in the afternoons anymore, which was awesome. It was tempting to call it good at that point and turn it into a Whole 10 program.

But the second half of the program is when your body starts to make a physiological change and adjusts to burning protein and fat for energy instead of it’s old standby carbs and sugar. As the month went on I wasn’t hungry all the time, and I felt like I needed less food to stay satisfied. I was shedding pounds. Most days I felt fantastic. 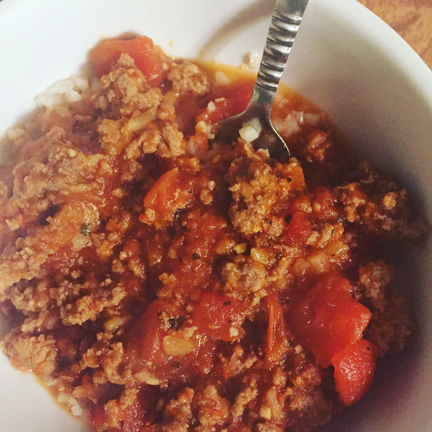 And then there’s the process of ditching those eating habits that are more psychological. For example, I realized I use eating as a procrastination tool. “I need to do this, but I’m going to sit down and eat something first.” Or after my morning walk, it was habit to go to Kwik Star and get a muffin or a mocha (or both!), totally defeating the point of walking 3 miles.

I thought the hardest part of the plan would be not eating all the foods I couldn’t have. Sure, sometimes I really craved a chocolate chip cookie, or I’d catch a whiff of the sour cream and cheddar potato chips Matt was eating and they would sound good to me in that moment. But for the most part, what I couldn’t have didn’t really bother me. I didn’t think that much about what I couldn’t eat, and focused on what I could eat. I enjoyed trying new recipes. It was actually kind of a fun challenge for me to follow the rules.

I’m not sure what that says about me. 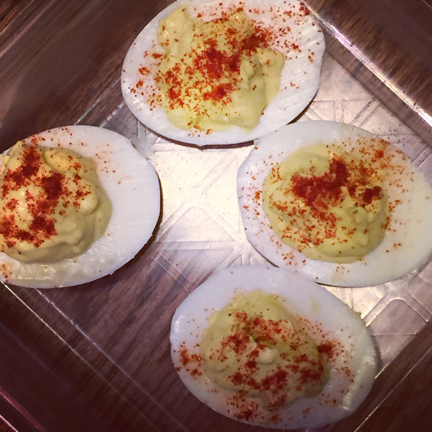 It was good that I had asked Olivia to join me. Because she’s a stickler. When I suggested we allow ourselves a cheat day so that we could partake in the brownie sundaes at her cheerleading banquet, she replied, “Mother! It’s only 30 days. If you want to go back to eating crap the rest of your life afterwards you can, but I think we can get through 30 days without cheating.” After that I never felt tempted to cheat. I would have felt too guilty disappointing Olivia like that.

(Okay, confession time. I did cheat a few times. On Day 1 I had a mint, just popped it in my mouth without thinking about it until figuring out later that it was off limits. Olivia had a piece of gum on Day 1, too. She thought we should start over at Day 1 the next day. I told her I would karate chop her in the shins if she made me start over because of a mint and a piece of gum. On Day 17 I made a “dessert” for my Bunco group. It was terrible, the only thing I made this whole month that I didn’t like. So I’m not counting that, either, but I do need to make that one up to my friends. Finally, on Day 27, Easter, I made Olivia and I dessert. A fruit tart, of sorts, made with approved ingredients. It was fabulous and I will definitely be making it again. #sorrynotsorry) 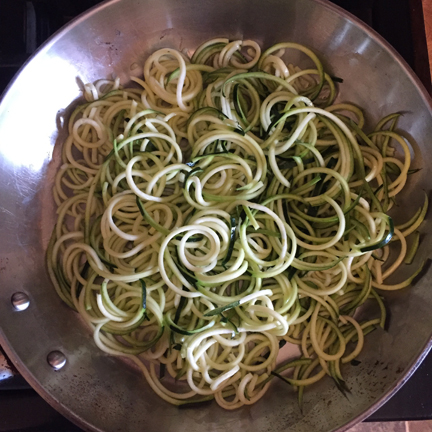 Zucchini noodles – loved these in place of pasta!

The whole experience definitely kept the scientific part of my brain engaged, observing how I felt going through the physical detox, observing some of the habits and routines I’d built around eating, figuring out how to adjust recipes to follow the rules. There was only that horrible dessert that I didn’t like. Otherwise the whole family liked everything I made and I’ll continue to make those recipes in the future.

The hardest part was the increase in time I spent cooking. I remember saying to Olivia at one point, “I don’t want to be hungry because I don’t want to eat because I don’t want to cook.” I enjoy cooking, but I wasn’t used to preparing a meal for myself 3 times a day. Prior to this, if I even ate breakfast, it was something fast and easy and processed. Lunch was leftovers, or a repeat of breakfast. But at least, working from home, it’s not as much of a chore to fix myself breakfast and lunch. Olivia had it harder than me. She had to be at school early most days, so she had to fix herself a breakfast before she left. And pack a lunch to take to school. There were a number of special school events during the month where she couldn’t eat what everyone else was eating. But she’s a trooper. And a stickler. 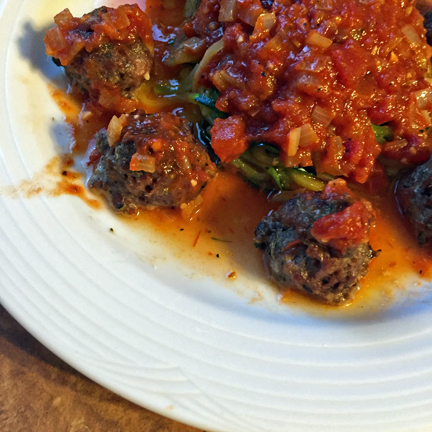 So the 30 days is over. I have my brain back, I have my energy back, I’ve shed some lbs. Now what? Part of me is scared to go off the plan because I feel so fantastic. Part of me just wants some Ben and Jerry’s. So the next challenge is finding my new normal. I’ll report back on that one.

Would I do it again? Yes, if I need to. I can’t argue with the results. But I’m hoping to forge new eating habits so that I don’t have to do it again. I have lots of recipes pinned that I haven’t gotten around to trying yet, so I’m looking forward to those. And I’m going to learn more about things like “carb cycling” and “intuitive eating”.

What do you think? Have you done a Whole 30, or is it something you’d think about trying?

4 Responses to My Whole 30 Experience